Anaxagoras crater is close to the north pole of the Moon, is about 50 km in diameter and is at coordinates 73.4 N / 10.1 W. There is a lot of impact melt within the crater which creates some interesting terrain. The interior of the crater was selected as a region of interest for human exploration by the Constellation program as this region may help in the study of the global magma ocean concept and the evolution and development of the lunar crust. The central peak of Anaxagoras crater is composed of pure anorthosite which probably formed when the Moon was molten and the lighter material floated to the top and solidified. 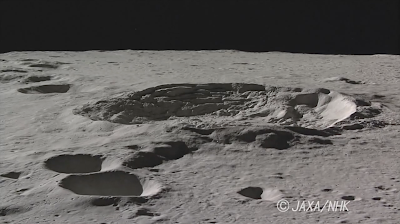 M155309869RC
A dome within Anaxagoras crater. Most of the boulders in the image are between 10 and 30 metres in size.

Quote:(author=LROC News System) Additionally, there are several hills and bulges that are covered with clusters of boulders. There are no impacts in the melt sheet that might account for the boulder clusters, thus a possible explanation is that the boulders are eroding out of the impact melt that covers these hills. These boulders look similar to boulder clusters eroding out of wrinkle ridges in the mare; are they the result of a similar process?

M155309869RC
A boulder precariously balanced on the edge of a cliff or steep slope.

See the Moon as Never Before

This post is part of Citizen Science September at the Zooniverse.

Not content with measuring craters and comparing boulders some Moon Zoo forum members go that extra step to produce something amazing. The Lunar Reconnaissance Orbiter’s Narrow Angle Camera repeatedly imaged some regions of the Moon under different sun angles or spacecraft angles.  By showing these images in sequence to produce animations the lunar landscape comes to life.

JFincannon also wrote a detailed entry for the Apollo Surface Journal. Using LRO  images and Apollo site maps to locate the flags he provided flag shadow animations for all 6 Apollo landing sites. These show clear evidence that the flags of Apollo 12, 16, and 17 are still “flying.” Apollo 11’s flag fell over during lift-off from the Moon and  JFincannon couldn’t find any evidence of the flag shadows at the Apollo 14 and 15 sites. Better resolution images might help determine whether these flags have fallen over or whether the tiny shadows are lost in the shadows cast by larger items.

Over the last 12 months the LRO took a small number of oblique images which involved the unusual move of rolling the spacecraft. Rather than pointing straight down at the lunar surface (0 degrees) the spacecraft and camera point at an angle, usually 50–70 degrees, and take an image looking across the lunar surface. The resulting raw images look strange and squashed but when stretched using image processing software they reveal some spectacular 3-D-like surface details. JFincannon posted a list of oblique images on the forum. Forum members then got to work producing some stunning moonscapes.

So come and see the Moon as never before. Help count and classify craters, contribute to building a hazard map of the Moon by comparing bouldery regions and search the high resolution images for yourselves. Then share your finds on the forum. We’re waiting!

A Mystery in Mare Crisium

The Luna missions were a series of unmanned spacecraft missions sent to explore the Moon from orbit and on the surface, by the Soviet Union between 1959 and 1976.

Three of these missions, Luna 16 (September 1970), Luna 20 (February 1972) and Luna 24 (August 1976), are of interest because they returned soil samples from the surface of the Moon. These missions returned 0.33 kg (about 12 ounces) of lunar soil in total and the descent stages of the spacecraft still remain on the Moon and can be seen in LROC images (see LROC: Lunar Sample Return Missions below).

Luna 16 returned 101 grams from Mare Fecunditatis. A sampling arm was used to drill into the surface to collect soil which was then placed into a sample container on top of the spacecraft which later launched itself off the luna lander and returned to Earth.

Luna 20 was the second successful sampling mission and the material returned from the Apollonius Highlands was similar in composition to the samples returned by the Apollo 16 astronauts.

Luna 23 and Luna 24 were both sent to sample Mare Crisium but Luna 23 failed (it may have landed on a slope and fallen over). Luna 24 was successful and sent back a 170 gram sample.
The Soviets originally thought that the two landers were within a few hundred meters of each other but using the images of the landers found on NAC images they appear to be about 2400 meters apart (see LROC: Mare Crisium Failure then Success below).

The sample material returned by Luna 24 was different from what was expected by the scientists. They had made certain assumptions about what the material should be, based on remote sensing data of Mare Crisium and their understanding of what Mare material should consist of. This mystery was only solved when the Luna 24 lander was found on NAC strip M174868307LC and shown to be sitting on impact ejecta from a nearby secondary crater. The sample returned to Earth consisted of material from beneath the surface of the Mare which had been excavated by the secondary impact.

Quote: (author=Jeff Plescia, LROC) The returned Luna 24 sample surprised scientists as it had unexpected characteristics based on the understanding of Mare Crisium geology at the time. Most importantly, the titanium content and the maturity (or the amount of time the sample was exposed to the space environment) of the sample material were different than anticipated. But how could this be? Based on the geologic context of the lander, the reason for the difference may now be understood. With the precise location of the landing site now known, the LROC images show that the mission sampled impact ejecta from a nearby 64-meter diameter crater. That crater has excavated below the surface bringing up material from deeper lava flows that had not been previously exposed to the space environment. Thus, the Luna 24 sample may not represent nearby Mare Crisium surface materials observed using remote sensing techniques, but rather the subsurface which was only exposed to the space environment for the relatively short time. It’s amazing what geologic context can tell you!

The Luna 24 mission may help with another Moon mystery – according to Soviet Moon Lander Discovered Water on the Moon in 1976 the sample returned by Luna 24 contained 0.1 percent water by mass.