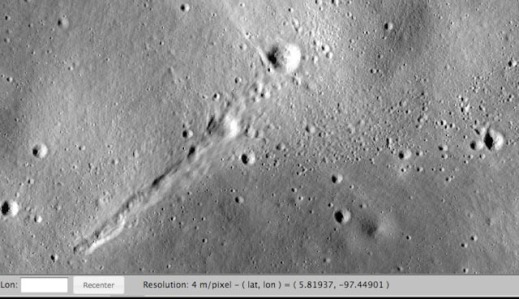 Around many large craters, smaller secondary craters can be found caused by falling debris from the main crater forming process. Secondary craters can appear in clumps, sometimes in a herringbone pattern, or more unusually in a line – a crater chain. We haven’t found many crater chains in Moon Zoo. This is probably because they tend to be large features and best spotted using a wide view. Some chains have distinct separate craters while others look indistinct and decidedly fuzzy. Using the ACT-REACT Quick Tool forum regular kodemunkey found a great example of a fuzzy crater chain north of Mare Orientale. 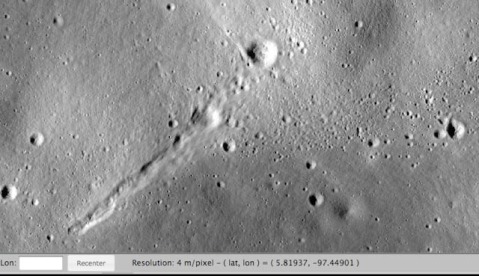 The fuzzy “landslide” effect is due to fragments of debris from the originating impact landing one after the other very close together in a line. The impacts and ejecta have interfered with each other resulting in a string of wispy densely-spaced secondary craters.

A closer look at ACT-REACT shows that the terrain slopes upwards from left to right and that the chain is just over 1km long. The elevation graph shows the expected dips where the debris has impacted. 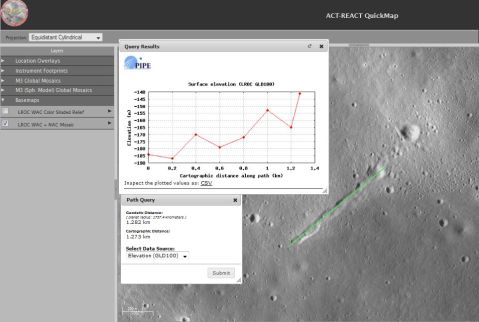 So where is the parent crater? Secondary craters fall radially to the original impact and up to hundreds of kilometres away. I think the most likely candidate is an unnamed fresh white crater 100 km away.

We have featured crater chains before as Image of the Week. They are fairly illusive but make striking images when you find one. And if you do find one, whether distinct or fuzzy, don’t forget to post it on the forum thread.

This is a very busy section for crater chains/secondary impacts near the Lunar North Pole at 72.51 N, 121.37 W

The impact formation at top right is especially interesting:

It is somewhat of a mystery to me on how it formed.  You can see what appears to be an ejecta blanket that perhaps moved in a W-E direction giving the surface a sculpted and scraped appearance.  That would be fine except for the line of craters that have made a chain of impacts on the left edge of this formation that would seem to have come in from a N-S or S-N direction.  Notice there is no surface ejecta sculpting to the left of this chain.

What are your thoughts?

Tom128 is a regular contributor to the Moon Zoo forum

Most of the time, craters occur randomly across planetary surfaces. They may seem to occur in clumps or clusters, groupings or voids, but because craters usually form from an extraplanetary impactor striking the surface, there is no preferred location on a planet.

This is one reason that actual chains of craters are interesting features that some people like to study. Chains of craters will usually form in one of two ways. The first is through a process that is endogenic – meaning that it is produced by forces on or within the planet itself. These are known as “pit craters” and form overtop an evacuated lava tube when the surface collapses into it. We see these on Earth in regions of volcanism like Hawai’i where we even have “Chain of Craters Road” on the Big Island. We also observe these all over the major volcanic regions of Mars. And, they are present on the moon.

An aerial (left) and ground-based (right) view of the “Devil’s Throat” pit crater on the Big Island of Hawai’i. Image courtesy USGS.

Since Moon Zoo users are asked to identify impact features, it’s the second type that we’re more interested in: Secondary crater chains. Secondary craters form when an extraplanetary impactor strikes the surface, creates large, cohesive blocks of ejecta, and these blocks strike elsewhere on the surface and create their own craters. Hence, they are secondary to the primary impact (astronomers are not that creative in naming things). Because of the way material is ejected, these can occur randomly spaced around the primary impact, in clumps, or in long chains. We ask you to identify crater chains in Moon Zoo in part to identify regions of secondary craters.

Understanding secondary craters is one of the “new old frontiers” in crater populations research. Secondary craters were first identified by a fairly famous planetary scientist named Eugene Shoemaker (remember Comet Shoemaker-Levy 9 that hit Jupiter in 1994?) in the early 1960s based on telescopic and early space-based photographs of the moon. The opinion of secondary craters – whether they are statistically important at a given size, how many are produced, how they are produced, the pre-requisites for their production, and their populations – has varied widely throughout the last half century in the planetary community. In fact, secondary craters were generally ignored. Until recently.

This is still an open debate. People generally fall into three or four camps. The first would be those who say that secondary craters don’t really exist at all except in localized areas. Very few people actually believe this. The second is that secondary craters exist, affect crater statistics, but that on a surface with a large number of craters the “background” secondary crater population is generally uniform and we don’t have to make any special consideration for them. The third is that secondary craters are important, are non-random, and need to be taken into account when using craters for most applications. A fourth potential camp is that they are important but are hopelessly tangled with the primary crater population so there’s “no use crying over spilled milk,” as the saying goes. I personally fall mostly in the third camp and a little in the second.

But, a better understanding of secondary craters is one of the main science goals of Moon Zoo. Helping to identify chains of craters – one of the few ways secondary craters appear on a planetary surface – is an important step in this goal. After all, we can’t really study them if we don’t know where they are! Many large secondary craters are known over the lunar surface, such as those produced by the relatively “youthful” Mare Orientale (roughly 3.8 billion years old) (see image below). With Moon Zoo, we’re asking you to look at very small-scale, meter-sized features as opposed to 10s of kilometers, and there is simply too much of the lunar surface for planetary scientists to do it all.

Large crater chains emanating radially from Mare Orientale on the Moon. The white lines are drawn above the chains so you can still see them. Image from LROC WAC mosaic (ASU).

So next time you’re identifying features on the moon, take a moment and look for any kinds of crater chains. Post them in our forum. If you’re adventurous, take some time to explore the lunar surface on your own with the wonderful ACT-REACT tool made available by the Lunar Reconnaissance Orbiter Camera (LROC) team. For more information on how to use it, see this helpful thread on our forum. Posting permalinks from the ACT-REACT tool is a fast and easy way to draw attention to a particular region and allows us to extract the relevant images and use them in our next round of Moon Zoo images.

Crater chains are just one type of feature we are looking out for in Moon Zoo but they are proving to be rather elusive. A number of processes can leave a chain of craters (a Catena):

There are many – too many – examples of three or four small craters in a line and while these may well be secondary craters from a larger impact they are not especially noteworthy. Some of the more famous crater chains are very impressive and contain over 20 smaller craters. It would be quite something if we could find an example like that.

These are some of our contenders so far:

Moon Zoo team member Irene Antonenko says:
“The wispy, feathery texture associated with crater chains is formed when the ejecta deposits of the craters in the chain interfere with each other during their emplacement (kind of like point-source waves interfering in a wave tank.)”

Discussion on the forum concluded that the impact angle was so low that the top part of the impactor sheared off and bounced to form the “tail.”

If you want to read more about Crater Chains try these links:

Apollo Over the Moon: A View From Orbit
List of Lunar Crater Chains (Catena)
Crater Chains on the Moon: Records of comets split by the Earth’s tides?

Finding a good, clean example of a long crater chain, whether volcanic or impact in nature, is this week’s challenge!

Jules is a volunteer moderator for the Moon Zoo Forum.