Linné crater is a young, well preserved impact crater on the western edge of Mare Serenitatis, at coordinates: latitude = 27.7, longitude = 11.8. It is 2.2 km in diameter and bowl-shaped and is often cited as a good example of a fresh impact crater. Its actual age is unknown but thought to be less than 10 million years.

It has been used to investigate how cratering occurs in mare basalts and the report from the 42nd Lunar and Planetary Science Conference (2011) has a very good description of the crater and compares it to the terrestrial Barringer Crater (aka Meteor Crater). The report can be found here: Linne: Simple Lunar Mare Crater Geometry from LRO Observations

There is some controversy about Linné crater to do with ‘transient lunar phenomena’ (TLP) maybe caused by outgassing. In the nineteenth century some astronomers believed that they had seen changes around the crater, in some cases they said that the crater had vanished leaving only a mound behind. This is discussed here: The Linné Crater Controversy 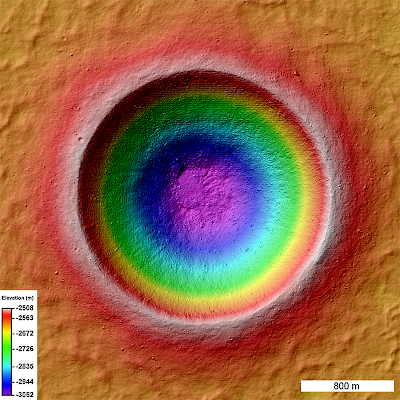 The following site contains a movie of a “fly around” Linné crater: Transient Lunar Phenomena (TLP) are one of the projects we are working on in the Moon Zoo forum as a direct result of a challenge set by Moon Zoo team member Anthony Cook – see forum thread: Moon Zoo Challenge.
In Anthony’s Looking For Change blog he says that we should be looking out for any interesting surface features that may have been freshly disturbed or contain a vent from which outgassing has occurred. “TLP” projects have been set up in the forum for each of the features mentioned, except for Deep Seated Fractures and another feature, “Atmospheric” phenomena (which was not mentioned by Anthony).

Deep seated fractures can be found on some images from LROC but “Atmospheric” phenomena will probably not be found. Some images taken during the Apollo project had fuzziness along the horizon when it was expected that the horizon would be sharp-edged. This may have been caused by dust particles suspended above the lunar surface by electrostatic charging.

The one feature which Anthony mentioned and which is not covered in the other TLP Project threads is deep seated fractures and he uses an example from the floor of Tycho crater:

One of the Moon Zoo users, ElisabethB (Els), found something similar near Proclus crater:

Apollo 17 astronauts saw and sketched what they called “bands”, “streamers” and “twilight rays” which were visible just before lunar sunset or sunrise. These rays were also seen by astronauts on the Apollo 8, 10 and 15 missions.

On the side of the Moon in daylight, the solar radiation knocks electrons out of atoms and molecules in the regolith. A positive charge builds up which is sufficient to loft particles 1 micron and smaller in size above the surface. These particles can go up more than a kilometre.

The Moon seems to have a tenuous atmosphere of moving dust particles. We use the word ‘fountain’ to evoke the idea of a drinking fountain: the arc of water coming out of the spout looks static, but we know the water molecules are in motion. In the same way, individual bits of moondust are constantly leaping up from and falling back to the Moon’s surface, giving rise to a “dust atmosphere” that looks static but is composed of dust particles in constant motion.
[quote byTimothy J. Stubbs, of the Laboratory for Extraterrestrial Physics at NASA’s Goddard Space Flight Center]

The four links below from NASA discuss various aspects of this phenomena:

Moon Dust in the Wind

For centuries Earth-based astronomers have reported seeing transient changes on the Moon’s surface, known as Transient Lunar Phenomena, or TLP. These have taken the form of short term brightness changes, coloured and non-coloured glows, obscuration of detail, shadow anomalies and flashes of light. The duration of TLP can be from a fraction of a second up to several tens of minutes; then everything returns to normal as far as we can tell from Earth. Unfortunately many of these so called TLP are from inexperienced observers, or made under poor observing conditions, however some TLPs are more intriguing as they are confirmed by more than one observer.

Although the Moon is widely believed by planetary scientists to be effectively geologically dead, there are four currently accepted theories that could explain some of these mysterious TLP reports: (1) Flashes of light seen on the night side are simply due to energy released at optical wavelengths from meteorite impacts – these are being studied by project ALaMO at NASA’s Marshall Space Flight Center and also by amateur astronomers at the Association of Lunar and Planetary Observers (ALPO).  (2) Eruptive out-gassing from residual radiogenic gases such as Radon and Argon that accumulate in deep seated cracks and are released during Moon Quakes – we would effectively see the dust kicked up from this out-gassing. A robotic telescope at Cerro Tololo, Chile, is being used to look for white light changes on the Moon every few tens of seconds, and amateur astronomers at ALPO and the British Astronomical Association (BAA) are searching for coloured events, and TLP in Earthshine or more shaded areas not easily accessible by the Cerro Tololo scope. (3) Electrostatic levitation of dust particles forming dust clouds in electric fields that build up around sunrise in the form of Moon dust fountains. (4) Internal reflectance off volcanic glass beads – analogous to rainbows. However the only attempt to prove a TLP was caused in this way, in Torricelli B crater, was unsuccessful at reproducing this effect.

Figure 1. (Left) part of an LROC image (M116282876RC) of the Ina formation with an enlarged inset (right) showing craters on the chaotic terrain

Here at Abewrystwyth University we have been analysing some of the statistics of past TLP reports. A preliminary report was given at the Lunar and Planetary Science Conference in Houston in 2009 and we will provide an update in September 2010 at the European Planetary Science Congress in Rome. However we are also very interested to hear from Moon Zoo users, via the on-line forum (e.g. Picture of the Week) of any interesting surface features that they think might have been freshly disturbed or perhaps a vent from which out-gassing has come from. You may find such features as you go through “Boulder Wars” or the “Crater Survey”. However for those really keen to find additional interesting objects, then they can dip into the Apollo Metric and Panoramic Camera or higher resolution LROC image archives, though the latter has a bit of a learning curve. Things to look out for include small craters which are completely shadow filled, whereas their neighbours are not – these could be ceiling vents into underground lava tubes. Also unusual disturbed surfaces that do not look like anything elsewhere in the vicinity such as Figures 1-4. We do not propose that any of these are examples of where out-gassing may have occurred, but they are the kinds of unique features that we would like to know about, just in case.

So as Jules says in an earlier Moon Zoo blog, please get out there, looking at the Moon close up and report your findings to the Forum. Just maybe you will be the first to identify a true TLP site, and if not then I am sure that your findings will interest the Moon Zoo geologists anyway!